Message From The Principal Desk

India Has Been The Leading Country In The World In Knowledge, Wisdom, Literature, Music, Art And Culture From The Very Beginning.

We feel proud of our old Vedic Satya Sanatan culture and heritage having four Varnas. There was no caste or creed and everyone was following his Dharma. But in the medieval period our culture and heritage had long been surrounded and shadowed by the dark walls, veils and chains of illiteracy, ignorance, distorted traditions and the appalled superstitions. India was crying under the heavy ruts of slavery, ignorance and superstitions prevailed in the contemporary world. 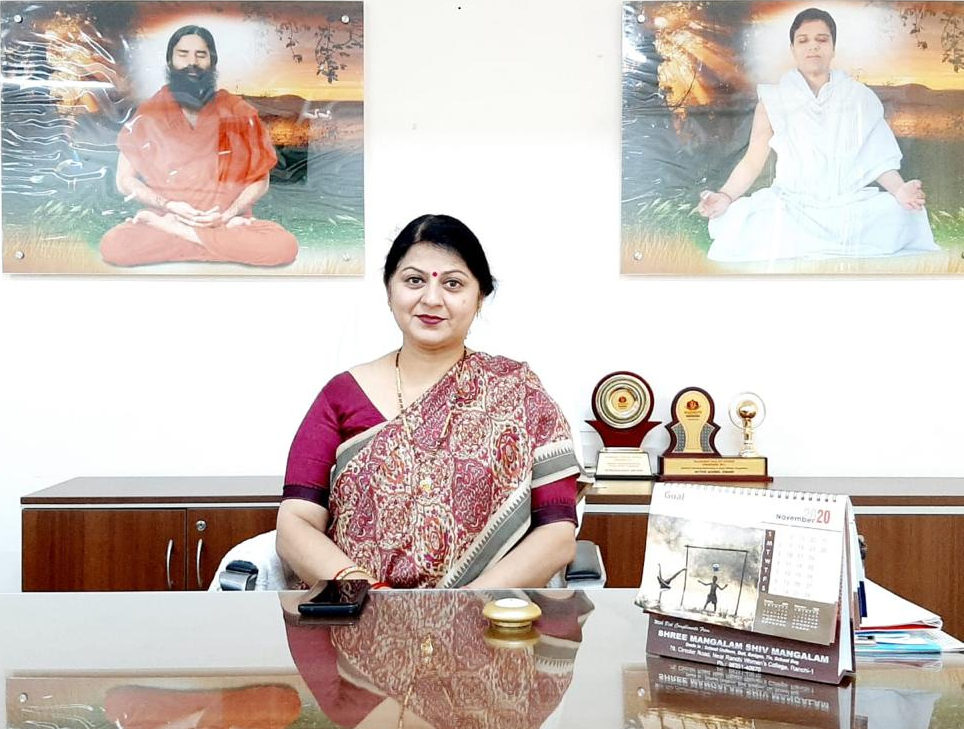 As a consequence the independent Indians had forgotten Indian consciousness or the immortal ideals, the life of Rishikul, Vedic knowledge as well. In such a critical situation Swami Dayanand Saraswati made the Indians aware of their glorious past.

–“This is the land from where, whence like the tidal waves, spirituality and philosophy have again and again rushed out and deluged the world. By giving the slogan, “Back to the Vedas”, Maharishi Swami Daynanda Saraswati inspired the Indian people to recognize the real existence of Indian consciousness and their own selves. But in the post independence period, even in spite of a lot of sacrifices of martyrs, the required level of austerity and ideal mission were not achieved so far or the system we decided to frame for free India was not very different from what we inherited.

It is obvious that little variant strains of innovation still exists, but these strains do not present and portray the entirely new face of our present day education system. In the modern era, materialistic thought gained dominant success in the field of science but the social and spiritual values and social superstructure had almost crumbled and innumerable social evils had gripped the Indian people in their ruthless and suffocating clutches. India was feeling ruthless to welcome a ray of hope which could dispel thick layer of ignorance from the lives of the millions. This ray is Param Pujya Swami Ramdev ji who gave the universal solution to the crumbled ancient values, culture, widespread violence and intolerance by spreading immortal dictum of Vedic values. It is true that scientific contemplation of the modern era has achieved a great success in the domain of Science but, at the global level, the only solution of the gradual loss of human values, violence, ill-behavior or misbehavior, corruption etc. – the turmoil which is easily visible- is modern education based on Vedic values i.e. Knowledge and Science. This scenario being observed in India’s current prudent age has an indelibly profound impact on the penetrating brain or mind of Param Pujya Swami Ramdevji and his associate the pioneer of modern Ayurveda, Acharya Balkrishna Ji. So they decided to create awareness among the Indian people through various wings of “Patanjali Yogpeeth” so that the pride of India, Indian economy and the ancient Vedic education system can be restored. Swamiji’s mission is to inculcate strength and manhood – things needed to hoodwink crisis and perils as he thought that these qualities got a temporary place under the influence of the imported hedonistic philosophies and materialistic view of life. Thus, protecting and preserving India’s self-respect, its economy, pride and education, Patanjali Yogpeeth is incessantly and ceaselessly igniting the imagination of India’s pride through innumerable projects in order to complete the resolution of India’s newly constructed edifice of knowledge.

The development of any nation largely depends on its human resources and the human resources develop through healthy body, healthy mind and good education. Education is at the core of social change. Any country requires its strong leadership, spirit of the age, education, reforms, patriotism, sacrifice, sense of community service etc. to regain its ancient glory and institution like Acharyakulam is essentially required to achieve such goals and restore the pride of India as Viswaguru, its ancient culture and education. Therefore, with this specific objective Acharyakulam in Haridwar has come into being in 2013.

After completion of their education in Acharyakulam the well-versed students will surely contribute to the service of the society and consequently they will also be successful in spreading the aroma of patriotism, old Vedic values, human values and morality. Keeping a holistic or all-round development of the individual student in mind, the students educated and conditioned at Acharyakulam will not only become good doctors, capable engineers or competent administrative officers but also ideal and good citizens who will be well acquainted with the human values along with the sacrifice and austerity.

It is well known that the great task of rejuvenating and reviving Yoga and Ayurveda in this world is possible only through the endeavours rendered by revered Swami Ramdev ji and Aurveda Shiromani Acharya Balkrishna ji which have already taken the form of a movement. In the same way both the noble souls have decided to enkindle the same sense in the domain of education which is the confluence and amalgamation of modern education and inclusive Indian Gurukul education under the same scheme in which Acharyakulam will open its doors in all the districts in addition to Haridwar. Thus, the coming generation can acquire qualitative education along with moral values. In the short term of three years Acharyakulam in Haridwar has already proved that the students initiated or educated in such an innovative education system will not only establish new dimensions and milestone in the modern world but also leave an indelible imprint on their sanskaras in various areas of which the family, society, and nation at large will feel proud. We are confident that the coming generation of the world will definitely get the benefits of the education system of Acharyakulam in the years to come. In this pious mission thousands and thousands of donors, societies, and state governments are whole heartedly willing to donate land in order to make the construction of this shrine of knowledge possible. Of late their proposals are in the process of verification and validation. After the completion of verification and validation, the pilot project for establishing Acharyakulam will come into being. The students studying here will ultimately come in contact with a new horizon of education supplemented with the perfect Vedic learning in the budding, flowering and blooming knowledge imparted by Acharyakulam and its tranquil ambience. Here each and every member is deeply engaged in teaching and learning process in order to culminate the institute as a shrine in the firmament of the nation’s institution.

After getting education from this temple of learning our students will surely become the ambassadors for spreading the ideals of Maharishi Dayanand Saraswati by raising themselves above any caste, creed religion and region. The students who sought admission here are from all over the country and it is a unique instance of national integration and after getting education from this budding institution they will definitely be the pillars of strength for the nation. Jai Hind! Jai Bharat!