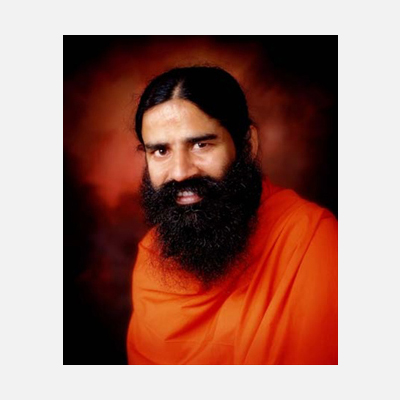 Yogarṣi Swami Ramdevji was born to Smt. Gulab Devi and Shri Ram Niwas in a village of Haryana. He had his early education in a village school. At the age of 14 he was admitted to the Gurukul at Kalwa (near Jind, Haryana) where under the blessed tutelage of Ācārya Shri Baldevji he studied Sanskrit and Yoga, and earned a postgraduate (Ācārya) degree with specialization in Sanskrit Vyākaraṇa, Yoga, Darśana, Vedas and Upaniṣads, later he was very much inspired by the life and writings of Maharṣi Dayanand and he thoroughly studied Satyārtha Prakāśa, Ṛgvedādibhāṣyabhūmikā etc. Along-side the magnetism of Maharṣi. Patañjali as an exponent of Yoga, Sanskrit Grammar and Āyurveda continued to exert its influence on him.

Quite early in his life he had his goals cut out for him, so he chose the path of celibacy and asceticism. After doing a stint of teaching Yoga, Pāṇini’s Aṣṭādhyāyī and Patañjali’s Mahabhāṣya at Gurukuls, he set out on his journey to the Gangotri caves of lofty Himalayas, away from the distractions of mundane activities.

Through deep meditation and ascetic discipline and penance he was able to develop a clear vision of the work to be done by him:

• Propagation of yoga and Āyurveda, and

• Reforming the social, political and economic system of India.

And then luckily he met with Ācārya Balkrishna, a kindred soul and a schoolmate, who was out there on a similar quest. They came together to launch upon this stupendous task from scratch

Swamiji took upon himself the onerous responsibility of demystifying and popularizing Patañjali’s Yoga, while Ācāryaji devoted himself to the task of restoring people’s faith in the efficacy of āyurvedic system of medicine. Swamiji’s main focus is on making the people of India as well as of the whole world adopts yoga and Āyurveda as their lifestyle. His approach to treating ailments and disorders in pragmatic, undogmatic and non-sectarian. All persons whether Hindu, Muslim, Sikh or Christian, have the same anatomy and physiology. Therefore they can all benefit from yoga and auyrvedic therapy. He has explained in detail the benefits accruing from yoga in his two popular hindi books on the subject:

In his yoga camps, attended by thousands of participants from all parts of the country, he emphasizes on doing eightPrāṇāyāmas (1.bhastrikā 2. kapālabhāti, 3. bāhya/ agnisāra, 4. ujjāyī, 5. anulomaviloma, 6. bhrāmarī, 7. udgītha, 8. praṇava), some sūkṣma (light) vyāyāmas; and some specific āsanas for various ailments, as also some simple home remedies and āyurvedic medicines. Within a short span of time the results of yoga and āuyrvedic therapy have not only been encouraging but also astounding. People have taken to yoga in a big way; they are doing it under the guidance of yoga teachers trained and certified by Swamiji’s Patañjali Yogpeeth, and watching and following it on various Indian TV channels, like AASTHA, ZEETV, STAR, SAHARA etc. People are learning yoga from the CDs, DVDs, audio-video cassettes prepared by the yogpeeth, Swamiji has tried to explain the Yogasūtras of Patañjali in simple Hindi in his bookYogadarśana.

While yoga will take care of physical, mental and spiritual health, the downslide, in social, political and economic system of the country will be salvaged only through the patriotic zeal, fearlessness and strong character, of which he himself is a living example. Recently he has launched Bharat Swabhiman Movement which encompasses all the ground realities of the Indian social, political and economic scene. He has given a clarion call to the people to come forward and save the country and the democracy. He wants to see an addiction-free, vegetarian, corruption-free India, proud of its Swadeshi products. His mind may be soaring in the ethereal spheres of spiritualism, but his feet are firmly planted on earth where he is very much alive to the mundane concerns such as treatment/ enrichment of soil, cow breeding/cow protection, cleaning the Ganga etc.

For his epoch-making work various honours/ honorary doctorates by universities have been conferred on him in India and abroad. On the invitation of Secretary General of U.N.O., Swamiji has led the stand up programme to pass resolution against poverty eradication from the whole world, at United Nation Organisation’s head-quarter in New York, on 15 october 2006.